We want your vehicle! Get the best value for your trade-in! 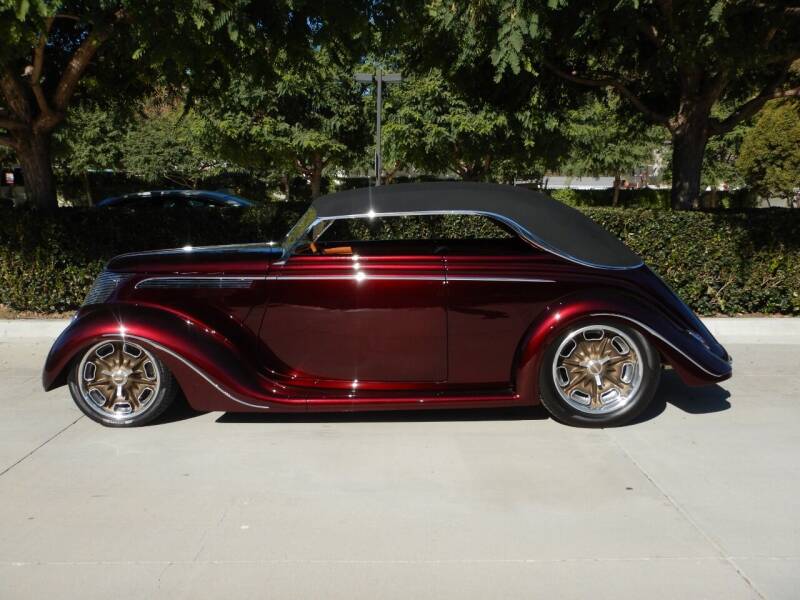 The Legend of Von Kuhl . . . Rumor has it that in 1937 Baron Von Kuhl and his wife the Baroness aka The Ice Princess saw this car while on vacation in Copenhagen, purchased it on the spot and promptly sent it to Herr Frisbie Fabrikation in Germany and he proceeded to turn it into Germany's first street rod! The Von Kuhls founded the Klub Schness Street Rods of Germany in 1938. For a short time they enjoyed shows, wanderings and much bier with their fellow club members. However, the club fell out of favor with the Nazi party because they had "too much fun" and their car had recently won "Best of Show" honors over several Nazi party members' cars. In addition and unknown to the Nazis, Von Kuhlwas adding the allies through acquisition of top-secret maps and other vital information. The Von Kuhls had to hide the car and escape to France and evidence found in the car seems to back up this claim. These items have been restored along with the car itself. Unfortunately the building hiding the car (behind a false wall) was bombed. The Von Kuhls never made it back to Germany. What was left of the car was taken out to the country and stored with many other avant-garde European classics by a local farmer. Eventually the '37 Ford was sold and ended up in Switzerland. Steve found it there while on a sightseeing trip after taking metal working classes at the Echold Kraftformer Co. He purchased the car and had it shipped to the U.S. where the restoration and restyling of this all-metal work of art commenced in '00. The rest, is history . . . This is a “ONE OFF” German bodied Ford, redesigned by Steve’s Auto Restorations (SAR) in Portland Oregon and recreated into an elegant “one of a kind” street rod consuming some 15,000 man hours to produce, it is truly a “one of a kind”. This Roadster d’ Elegance winner began life as an original Karl Deutsch from Koel custom coach built 1937 Ford Cabriolet A very rare car to start with. This1937 Ford chassis was first shipped to Grue & Company, a Ford dealership in Copenhagen, then sent on to Deutsch for a custom, one only body Extensive sheet-metal fabrication was required in the build and very little of the original body remains such as the rear fenders, the top of the hood, and the top reveal lines of the body and the upper portions of the doors. The lift off top was made out of aluminum and hand fabricated. The luxurious interior was done in handpicked elegantly rich furniture grade leather, there is a hand formed and painted steel console that runs from the dash on through the interior into the back seat area. The original German gauges were upgraded to 12 volts with modern components to marry up to the 514 CI Ford SVO racing engine that is Fuel Injected and produces over 650 HP. The gauge faces still maintain the original German script relating to the function of each gauge Art deco speaker pods mount on the rear deck behind the rear seats. The headliner in the lift off aluminum top is done in ultra-suede with a classy art deco rear dome light above the rear window. The console sports a chrome shifter that matches all of the other chrome trim pieces on the interior, which were totally hand formed from brass stock. The interior has air conditioning. The car has an automatic transmission and a 9? Ford center section in an independent rear end The Under carriage is highly detailed. The entire chassis is fabricated new with Kugel independent suspension front and rear. All trim on the body was hand formed from brass stock then triple chrome plated. Stylish chrome inserts in the reverse fender reveals mimic the type of trim used on Mercedes of the 1930’s. 80% of the body is new hand formed sheet metal to a designer’s layout. The aluminum lift off top was shaped on a Yoder power hammer as a two man operation. The chassis was also designed and built in-house and features independent front and rear suspension and a riding on a set 1off Budnik set of wheels. 6 Piston Willwood Brakes were used. The entire

Delivery to your doorstep! Find local dealers in your area who will bring your newly purchased and freshly cleaned vehicle directly to you.

Unless prohibited by applicable rules or regulations.

Information deemed reliable, but not guaranteed. Interested parties should confirm all data before relying on it to make a purchase decision. All prices and specifications are subject to change without notice. Prices may not include additional fees such as government fees and taxes, title and registration fees, finance charges, dealer document preparation fees, processing fees, and emission testing and compliance charges.

Enter your phone number or email address to receive this VIN

Success! Your message has been sent.

Uh oh! There was an error sending your message. Please try again in a few moments.